Another search mode as shown in this Cheat Engine Tutorial is the Code Finder.

You have certainly noticed that trying to reuse an earlier cheat created on your game, often after the game reboots, this cheat is unusable.

The reason is very simple when the game is restarted, the memory area that is used to load the game is different from the previous load, so the addresses found are pointing to different areas of memory and their editing is completely useless If not even “malicious” (it may cause the application to be blocked or, in the worst case, your operating system).

Here is the video tutorial for this lesson:

Compared to the simple search for a memory address of which will modify its value to increase life points, energy or anything that comes to mind; The Code Finder, makes another step forward, allowing you to find out which code is going to write on that address.

In this way it is possible to modify the founded code and replace, for example, with another that does not reduce the value that we have tried.

Using this code, we will have a double advantage.

On the one hand, we can get “god mode” cheats and we’ll be invincible, even if so to say it’s reductive, because only the code’s ability to use and our imagination can limit the type of cheat that can be created with this technique.

On the other hand, using the code rather than the address, the cheat founded will be re-usable even when the game is restarted and you will not have to redo all the procedure to find the cheat.

Cheat Engine Tutorial – Code Finder – How to use it

See in detail in this tutorial Cheat Engine is an example of Code Finder.

We load Cheat Engine and his tutorial as shown in previous lessons.

Let’s take the fifth step of the tutorial, which will help us with an example for using the Code Finder. 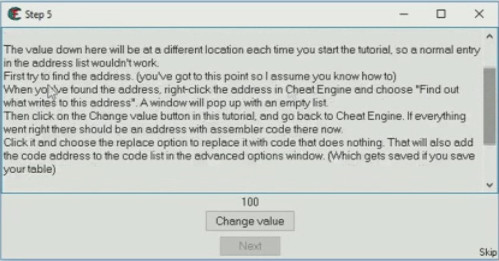 The first step is to find the specified value.

The procedure is the same view in previous lessons.

Then we activate Cheat Engine tutorial on the process and insert this value (1) in the search field (2), as shown in the following figure:

and we start the search.

Edit the value of the tutorial and continue the search.

We will find a single address.

Add it to the address list, right-click on it, and activate the “Find out what writes to this address” entry by activating the debug mode. 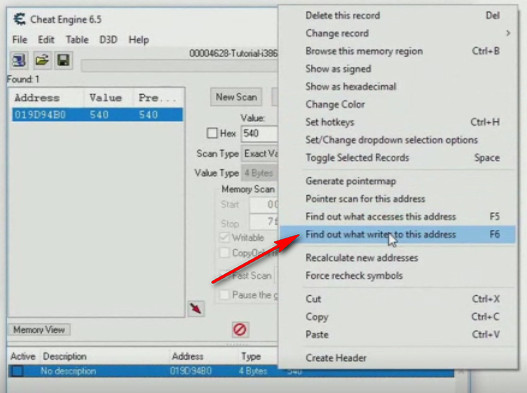 At this point we are ready to find the code that writes to that address.

Click on the tutorial button to change its value.

The code will be found and will be added to this list on the debugger. 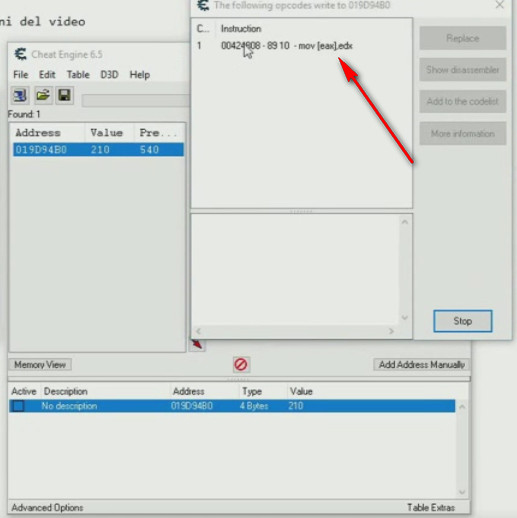 Well, find the code, the tutorial proposes instead a code which does absolutely nothing and add it to the codelist.

To do that, we first have to click on the “Replace” button (1) and subsequently on the button “Add to the codelist” (2) obtaining what is present on (3).

This will block its modification, and we can get in our favorite games the god mode mode with points that never go down, or endless weapons etc.

To complete the tutorial suggested by Cheat Engine, you must click on the “Change value” button and you will see that the indicated value will not change.

It will also activate the button to proceed to the next step of the tutorial, by successfully completing this step.

However, I would like to add something to better understand the potential of this technique.

In addition to the address, the code you added to the codelist will also be saved.

Close Cheat Engine and its tutorial and let it start from scratch.

Riportatevi the fifth step of the tutorial and redo the procedure to find the address of its value to search.

You will see, a result obtained, that this address is different from that found in earlier.

You will understand that by modifying the address value of the previous rescue would not have achieved any useful result.

Reload the save created at the previous step.

Cheat Engine will remind you of the presence of the codelist by opening the section with the saved code. 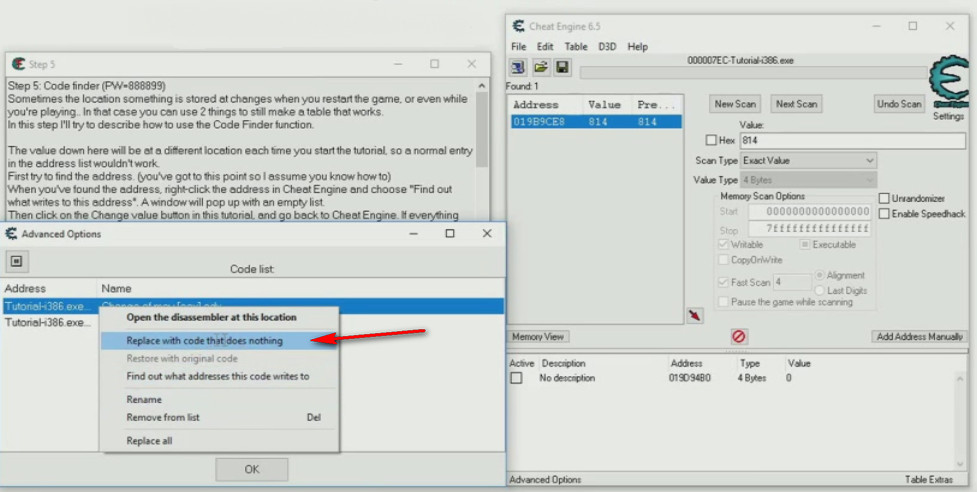 Activate the replace of the code as shown in the figure, and you will have reactivated the replacement of the null code.

This can be done in other ways, though at this moment is the easiest way, we will see others in the next lessons.

Try to change the value of the field on the tutorial, you will not be modified and will be activated the next button, in order to indicate in this case the operation to succeed.

Hello friends, today's article is about Warlords of Aternum guide - Strategy Tutorial to game, the guide for a strategic turn-based that...

With "Art of Conquest guide to the strategy on game" i inaugurate the new category of articles regarding guides to game. I choose the...

Today i will show you how to use Cheat Engine with Ankora, which i added a few days ago to the list of the best free offline games for...

Welcome back, it's just started the month of June, summer is approaching and I wanted to propose you a nice cheat for SOLex Stone of...