Wonderful football game for Android, in my opinion the best currently in the market store.
Graphically well maintained and fluid.
Flaw slightly in AI of NPC teams.
Almost perfect.

The football championship has just finished, and last Saturday the Champions finished with a 4-1 victory over Real Madrid on Juventus.

In order not to open a hooker among fans, I will not tell you who I fancy or if I am fan of one of the two teams, but the question that all football fans are asking is “what do I do until August”?

If you can not think about football when your wife or girlfriend takes you to the sea, maybe I have the solution for you.

Dream League Soccer 2017 is one of, if not the best, football game for Android.

Here you will find a short video of gameplay, just to give you an idea:

Saying Dream League Soccer 2017 is the best football game for Android is a strong statement.

But we consider what alternatives are.

In the world of PCs and consoles, Fifa and PES are bosses, but on mobile devices these two titles can not convince.

On the one hand, they introduce concepts that are unwise to players as the energy to spend in order to play and recover very slowly.

On the other hand, you play everything except in a football game.

Dream League Soccer 2017 fits in with bullying among the best soccer games for Android because it realizes what a soccer game must have, that is, playing football matches without waiting for hours to play.

Let’s go into the detail of the game and see the salient features.

Dream League Soccer 2017, was developed by First Touch, the same software house of Score!Hero, which I had reviewed a long time ago.

Here is the article about it: Recensione Score! Hero – Gioco di calcio gratuito offline per Android.

The game looks like an arcade with a side of management. 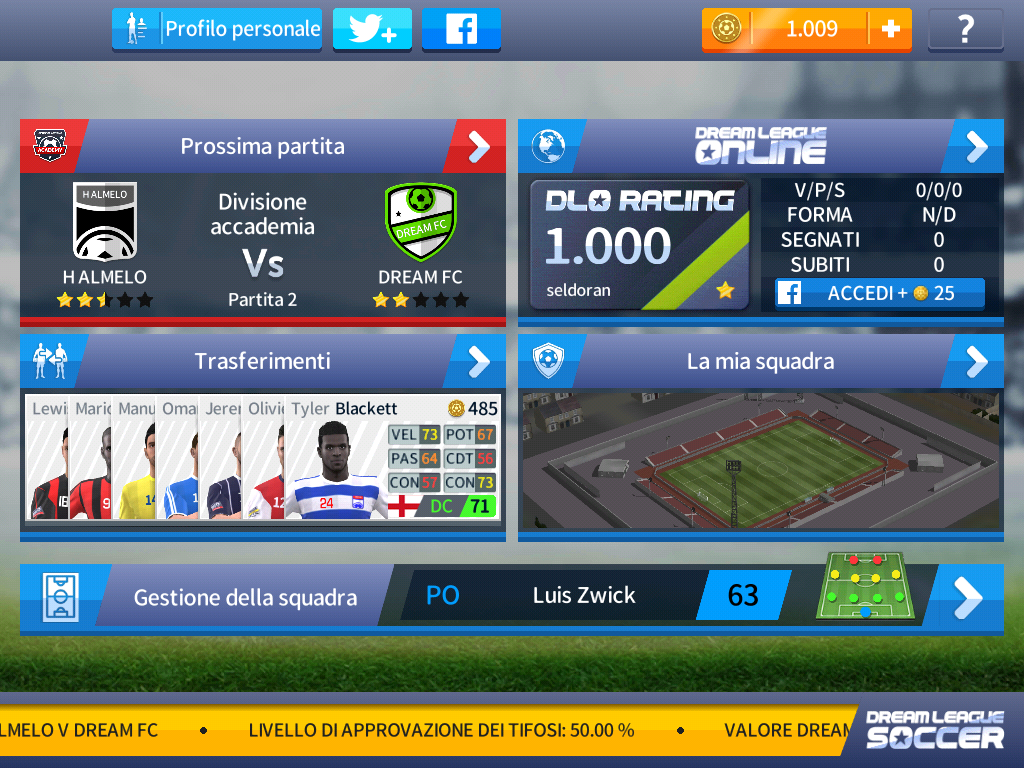 You will start from the lowest division and you will have to play and improve your team to try to place you higher and get into the next division.

You will have a total of six divisions to face and overcome, and more than seven cup competitions.

Everything runs around the coins needed for each enhancement you want to buy. 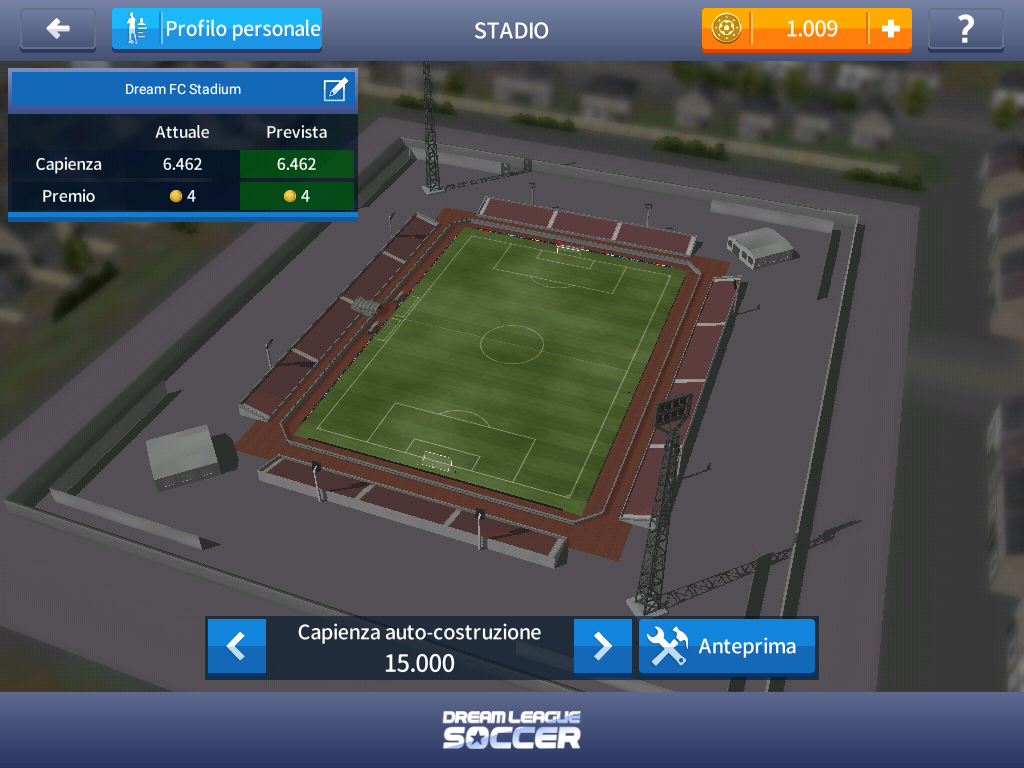 To buy new players or upgrade your stadium, game coins are necessary.

The strange thing is that even to train your players you need to use coins.

The higher the statistics to increase, the more expensive the training is.

I would have preferred maybe, always buy coins with a coach and reason in less arcade and more managerial terms.

However, this choice, though controversial, does not lose much of the game.

The coins can be earned simply by playing, and you get a bonus if you win, you score and you play at home.

In the latter case, the upgrading of the stadium, affects the number of coins obtained as a bonus.

So it’s good practice to try to raise the stadium to get more coins when playing at home.

Another way to get coins, as in any good Android game to play with app purchases, is paying to get them or watching the promotional videos offered.

In Dream League Soccer 2017 we will have to focus the energy of our players and apply a minimum turnover. 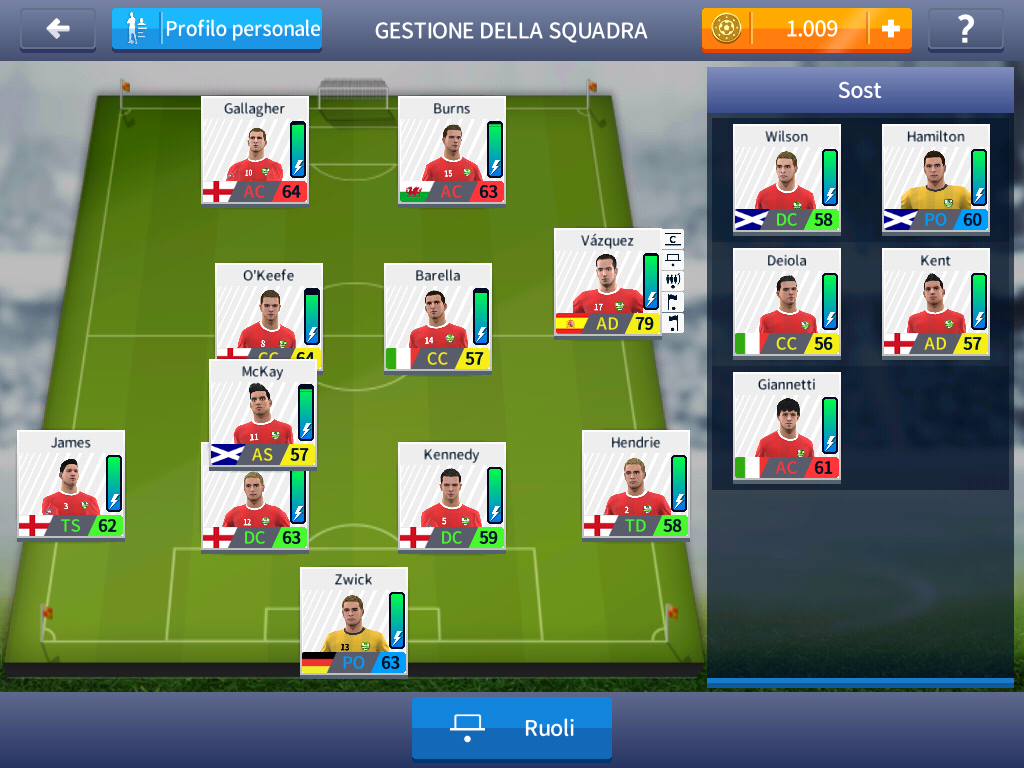 We may also be forced to replace a player because of a red card.

However, team management is an important part of the game, trying to use the best players when dealing with the strongest teams. 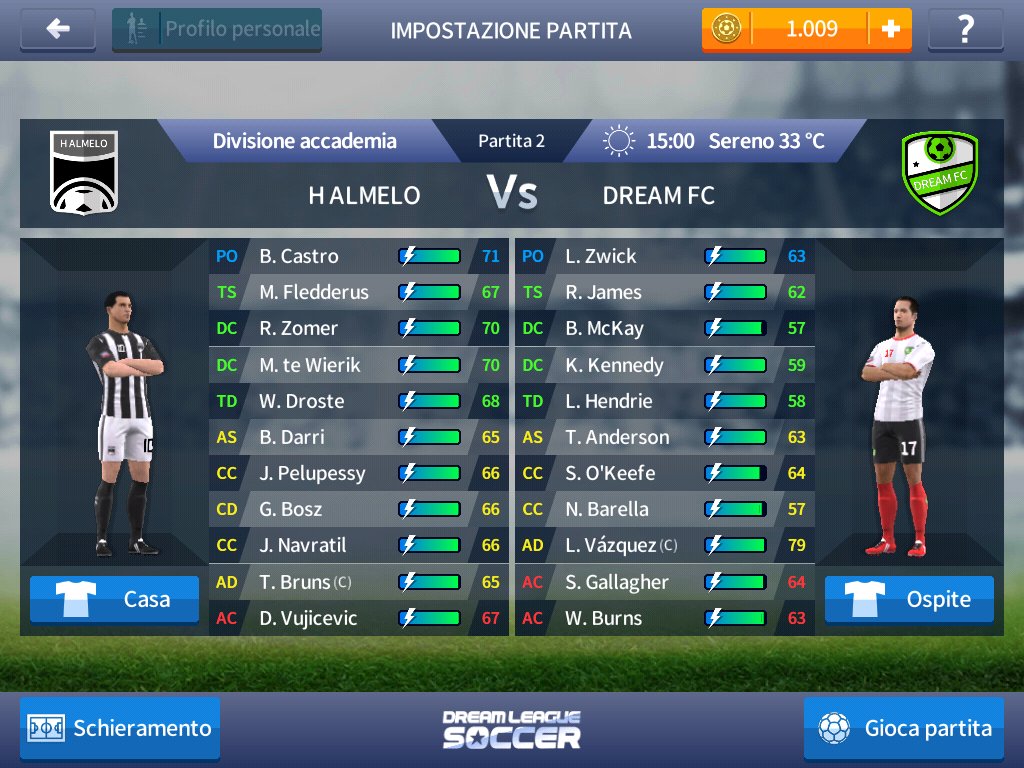 The initial team is one of the poorer of the championship.

It’s up to us to try to improve it to grab some good purchases and increase its technical characteristics.

So far, however, it has rarely occurred to me to replace a player just for exhaustion.

Dream League Soccer 2017 – The game and the PvP

And here is the crucial part of the game, or the game.

Players are controlled by a virtual pad, very often used in Android games.

We will have the joystick for the movements, on the other hand, the three buttons for managing the actions of our players.

With the ball at the foot we will have: 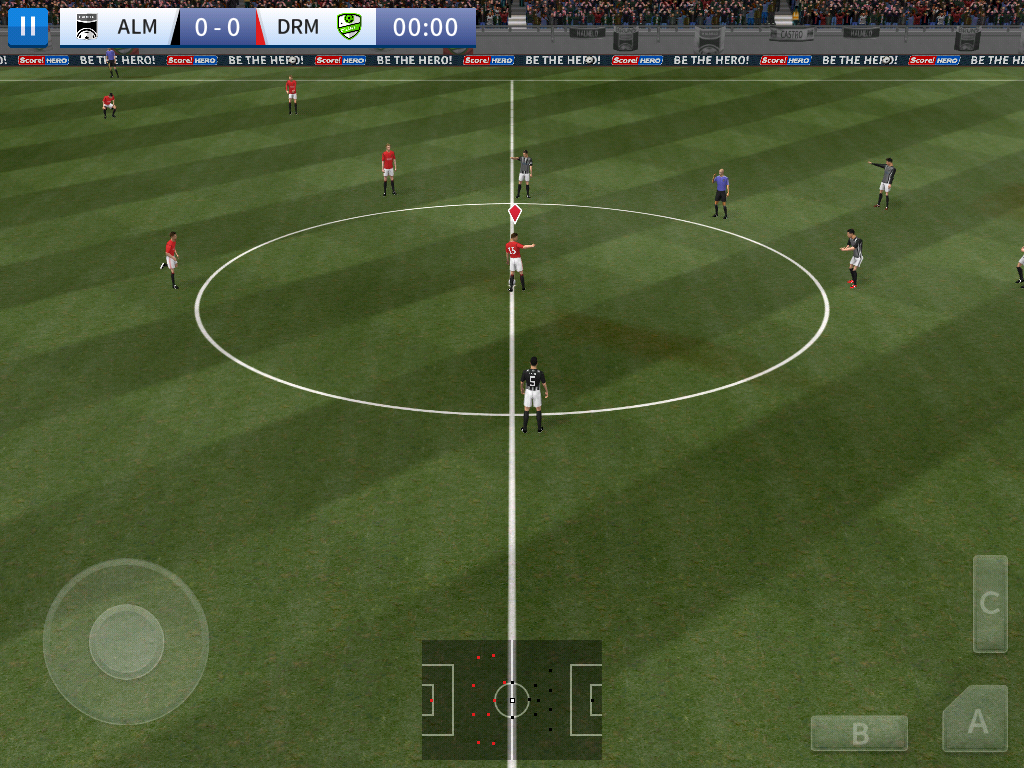 I must say that sometimes this kind of monitoring is unsatisfactory, and if you fail the contrast often your opponent manages to get in the door with no chance to counter it again.

But after taking the necessary measures and the first defeats, the controls are able to master without much difficulty.

Some of my friends complain about the difficulty of pressing the right button on smartphones since they are very small.

In addition to being able to face single player championships, Dream League Soccer 2017 offers the chance to play against real players online.

This mode allows you to greatly increase the longevity of the game by having to face ever-stronger players and try to prove to everyone their skill.

Well we have reached the final conclusions on the game “Dream League Soccer 2017”.

As regards the technical aspect, the game I was very impressed, seems to have in hand a console or a personal computer.

Graphically it is well maintained and the animations are very fluid.

The artificial intelligence of non-real teams in some cases presents some problems.

It happens from time to time to see npc players go with a ball to the ball directly out of the field without an apparent reason.

However, if I were to give a score from one to ten I would give a nice nine.

and here Download of game from ITunes for Apple IOS

Let me know yours, and subscribe to my YouTube channel and to my pages to keep you updated on my last articles and news.

It costs you nothing, but for me it is the incentive to keep the blog alive.

Welcome back to everyone, today's article is the review of the football game for Android/IOS Score! Hero. For a few days i've been...

This website uses cookies to improve your experience while you navigate through the website. Out of these, the cookies that are categorized as necessary are stored on your browser as they are essential for the working of basic functionalities of the website. We also use third-party cookies that help us analyze and understand how you use this website. These cookies will be stored in your browser only with your consent. You also have the option to opt-out of these cookies. But opting out of some of these cookies may affect your browsing experience.
Necessary Always Enabled

Any cookies that may not be particularly necessary for the website to function and is used specifically to collect user personal data via analytics, ads, other embedded contents are termed as non-necessary cookies. It is mandatory to procure user consent prior to running these cookies on your website.