Dropsync or FolderSync – Automate the synchronization of files and folders

This article will be compared two instruments for automated synchronization of files and folders, or Dropsync and FolderSync.

We’ve already seen how to use Dropbox to backup your data (for those who lost it Cloud storage – Dropbox – User guide).

The app in its desktop version keeps your files and folders synchronized with the cloud, but this does not happen with the Android app and you are forced to manually sync your data.

The problem can easily be overcome with an app like Autosync Dropbox – Dropsync or FolderSync.

Dropsync is an app distributed by MetaCtrl that adds automatic synchronization and sharing capabilities between the Dropbox cloud and all devices in its possession on which the app is installed with your credentials.

FolderSync has the same function as Dropsync, but it is more generic as it manages different types of cloud (such as Google Drive).

App for synchronization – a classic scenario

The classic scenario is as follows.

On an “A” device (such as a tablet), we decide to back up a folder on Dropbox.

To do this we use Dropsync or FolderSync by pointing to the folder of interest on our device and the destination folder on Dropbox.

From now on, the app will automatically synchronize our chosen folder with Dropbox folder selected.

To complete the scenario, let’s imagine that we have another device called “B” (such as a smartphone) that we want the same photos taken on the tablet and vice versa.

We install for this purpose the same app also on the second device and repeat the folder configuration, similarly to what has already been done on the tablet, even on the phone.

What will happen after completing the configuration of both devices is that the two devices will be completely synchronized to the previously configured folder.

Which means that when a file is loaded, deleted, or edited on one of the two devices, the app will start synchronizing and the same thing will happen on the second device.

After setting up your account on the cloud, the Dropsync main screen will be displayed. 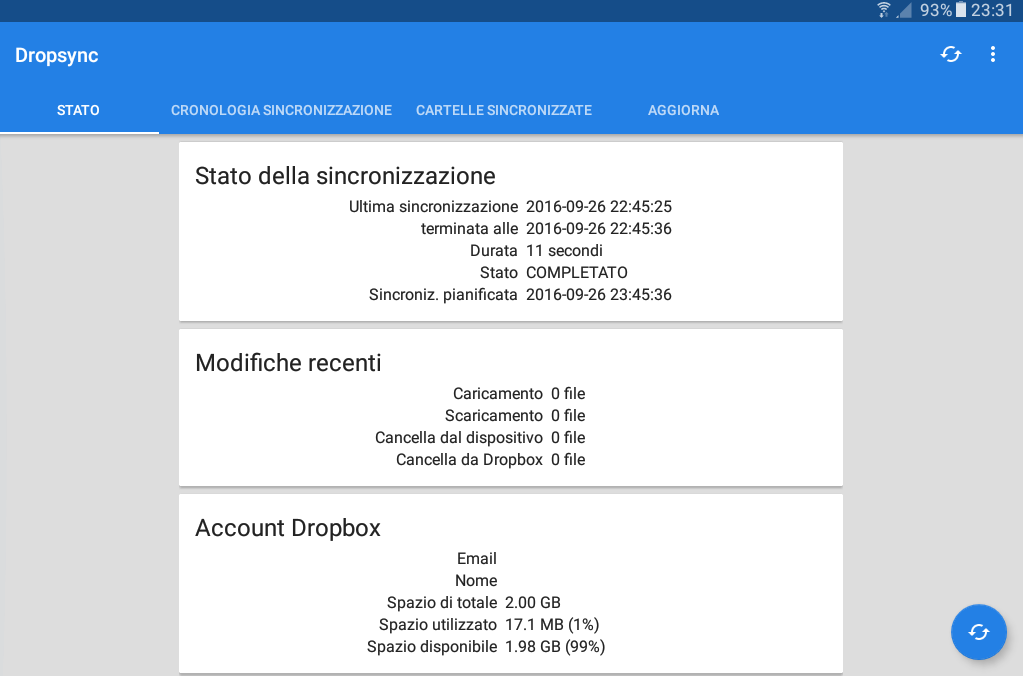 From this screen you can check the file update status, access the synchronization history to see the past events, see the currently synchronized folders (where you can enable / disable auto sync and choose the synchronization type on the selected folder ” Bidirectional, “” charge only, “” charge, delete, “” mirror, “etc.), and access the options to update the app version.

To configure a folder to sync, select the “Synchronized Folders” entry, you will be presented with the screen:

Select the button add and indicate your local folder and remote folder on dropbox, pointing to the synchronization mode, and save the configuration. 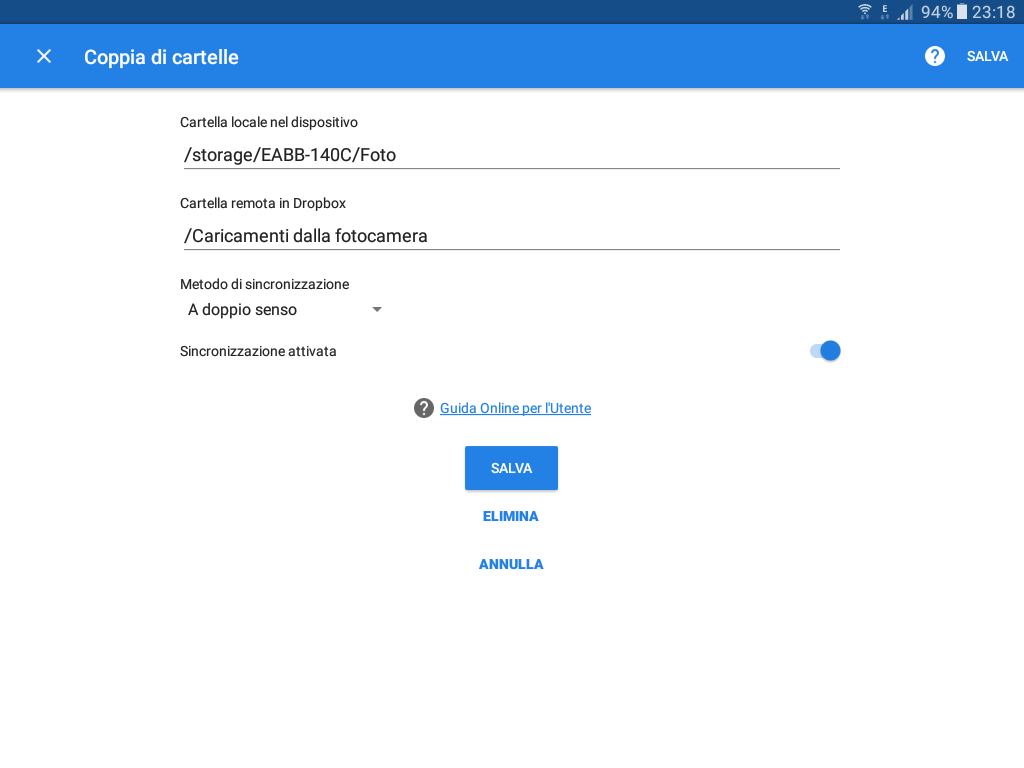 It will create a new automatic synchronization process (which in the case of the free version is also the unique).

Of Dropsync, there are four versions:

and wait for the application is installed on your device.

When you start the application, you will be presented with a screen similar to the following: 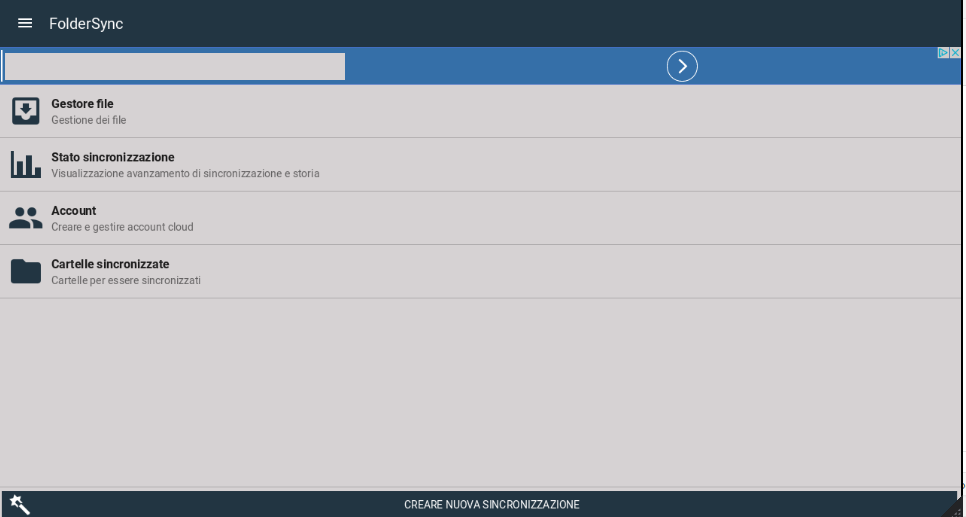 To difference of DropSync, in this case we will be able to choose from a large number of clouds 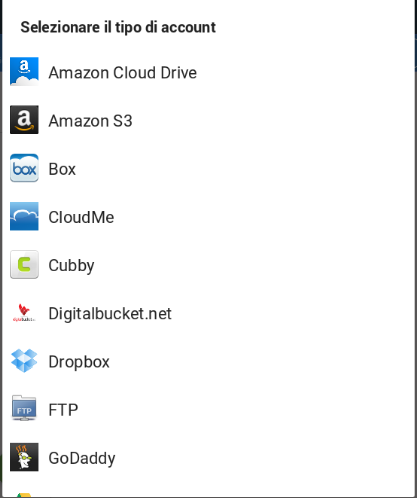 You also specify a name that identifies the cloud account during selection (to facilitate the life of multiple accounts with the same cloud).

At this point, go to the “Synchronized Folders” section and create a new set of values. 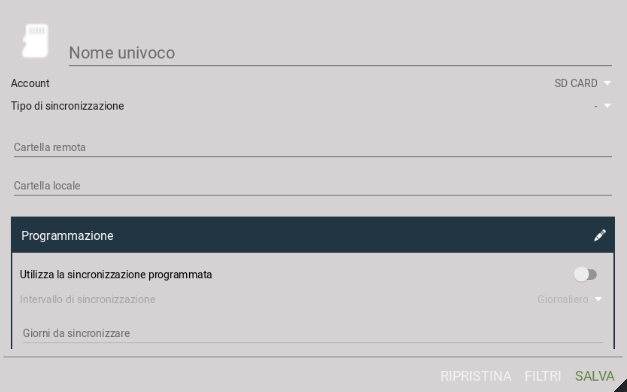 We give a meaningful name to this synchronization process to make it clear folders on which we will work.

We select in account the name given above to the cloud account created a few lines above and the type of synchronization you want (bidirectional, remote folder, local folder), very useful feature in case you have a few jigs available.

Let’s say the remote folder to sync to the cloud and the local folder on our device.

In addition to these parameters, there are many others that can be set to better synchronize, such as the ability to indicate uploads and downloads only in the presence of wireless.

As you can see from the figure, it is very simple to identify any synchronizations that have been successfully completed or not.

By evaluating both products in free version, FolderSync undoubtedly wins because it is not as restrictive as DropSync is.

The restriction to a single folder or to the limit of 10 mega files DropSync, is extremely heavy because in both cases is an exaggeration limit if you really want to use.

FolderSync allows you to use different types of clouds, so we do not have to stop at Dropbox, but we can use everyone we prefer.

So why i talked about DropSync?

Because FolderSync is even easier to use and has a minimal interface that makes it usable even by less experienced.

Also for those who buy it, the above limitations will not be present, which makes it a good product.

Your likes and shares is the best way to show appreciation for my articles.

Welcome back, today's article concerns ShareIt, an application that should not be missed in any of our devices. Yes, you understand...

Hi everyone, today i will show you an application that in my opinion can not miss on an Android device, Asus Share Link. Surely you will...

ZenUI Asus File Manager is the alternative to Share Link for owners of Android from version 7 and up. For those who like me have been...

Welcome back to my blog, today's article will show you how to use WhatsApp web (or Wapp web). Surely already you know WhatsApp, the...

Today's article is directed to all the geeks of Cheat Engine and for people like me who has tried to use the network functions of Cheat...