Hello and welcome friends, today’s article is about “Retro games”, games of the eighties brought to the IOS world and reviewed with modern technologies.

Perhaps the very young will not say much, but I am sure that those who have a few extra years will know them for sure and will be crossed by a thrill of nostalgia.

This article is also the first suggested by you to make room for even the indie developers that you proposed a few weeks ago:

in this case the developer in question is called Mauro Colombo, he is 48 years old and live in Bergamo.

But let’s go in order and see what pushed this guy to try his hand at the project he called “Back to the 80’s – The Games”.

Mauro is a computer enthusiast who due to force majeure, in recent years approaches the Apple world and learns to develop software in Swift for Apple devices.

From the beginning he tried to develop some of his original projects, but the lack of graphic collaborators led him to abandon his first projects without ever giving up.

This year, he comes across a very old Nintendo Game & Watch from 1981 and realizes that they are still really addictive games today.

This lucky coincidence gives him the idea of making some projects for iPhone (and iPad) of these Vintage Retro Games games.

Although they may appear “dated” games, in reality the people around them, look at them with an unusual curiosity for those who have never seen them, and with an immense nostalgia for those who instead grew up playing with it.

Opens the Facebook page “Back to the 80’s – The Games” and starts publishing some games on the Apple App Store.

Some are classics for nostalgics, others are completely new to its design in both graphics and gaming.

With his work he tries to convey the feeling of having in his hands those small old consoles, keeping intact the effects of liquid crystals and the basic sound.

To get the most realistic result possible, he played for hours at a time the real consoles of the 80s trying to migrate the feeling experienced with those consoles on the device of the apple.

The result obtained is in the feedback that he is getting.

The younger ones are struck by a graphic that although retro, is on the contrary something unknown to young people, so it is something innovative for them instead.

The older ones find in these games the same feeling as in kids.

The games are available at the cost of a couple of coffees for all iPhone and iPad owners, at the moment the transition to Android is not yet foreseen, but if the project is successful, I am sure that it will certainly also extend to that system .

The retro games are made specifically with this choice, free from advertising, in-app purchases, energy charge, sharing request on company.

This is to facilitate ease of use, and as mentioned earlier, give the user the feeling of having a console of the 80’s into their own hands and not the usual mobile gaming.

However if you want to have a look at one of these games and experience the feeling I’m talking about, keep reading this article, you will find the link to the lite version of “Fire Dept 80”, which is completely free.

First among the retro games is Chef’s Son, a revisitation of a 1981 Classic.

The chef’s son is left alone in the kitchen and the player has to juggle between the pans.

The hard part will be being able to make the various foods bounce in the air with an inexperienced stroke of the wrist, trying not to let even one fall on the ground: the little dog would be ready to take advantage of it in an instant!

In Game B, as well as a starting speed more suited to experienced players, a spiteful little mouse will try to divert you from the right rhythm,

In addition, as if all this were not enough, we will have to pay attention to the pots on the fire and avoid taking unexpected burns!

You can find this game on iTunes at this address:

West Frontier is the second game in the series retro games, and it is the revisitation of a Classic of 1982.

The player plays the role of a Cowboy in a Fort that must defend itself from continuous attacks by bandits.

Some bandits will try to climb the tower to destroy you, while other bandits will instead opt to throw dynamite sticks at you from a safer distance!

You will only be able to rely on your alertness by hammering out the dangers that arise, one after the other, in an adrenaline-filled sequence of attacks.

The more you go up with the score, the more frequent and quick the attacks will be: losing your concentration!

You can find West Frontier in iTunes at the following address:

Another retro game is Bowling’s Boy, a totally new game that follows the retro style but with a completely innovative and unknown gameplay.

The player plays the role of the boy behind the scenes who arranges the fallen skittles of the bowling lanes.

Be careful not to be hit by the knocked-down pins.

In game B, also pay attention to arrange the pins in time, before the ball reaches the bottom of the track, otherwise the customers will get angry! 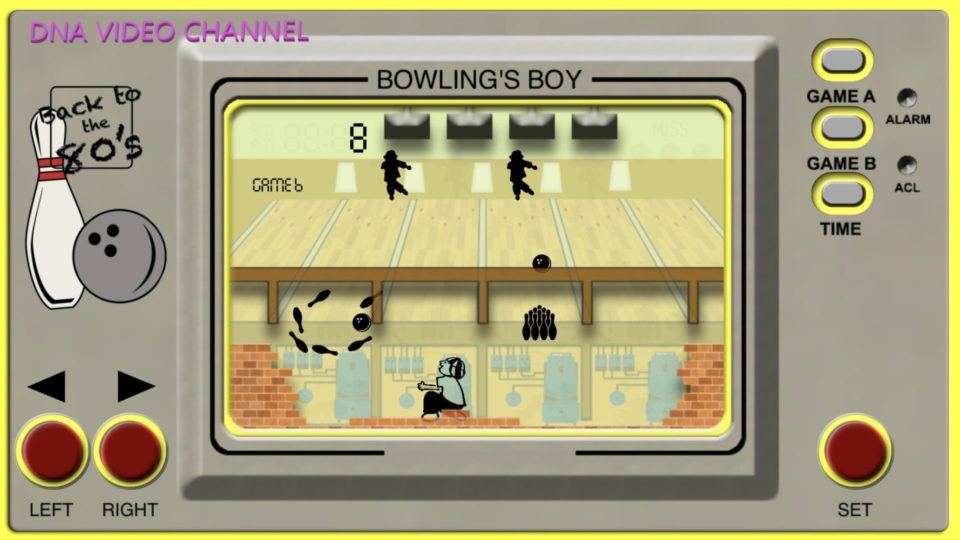 To play with Bowling’s Boy, download the game from iTunes:

Fire Dept 80 is a retro game, revisiting a great Classic from 1980.

A burning building, civilians are throwing themselves from the balconies and only your team of firefighters is their only hope of survival.

Hurry to save the people you throw with the canvas, accompanying them to emergency relief.

Experience this adrenaline-filled 80s revival, challenging your friends to beat your best scores, bounce after bounce! 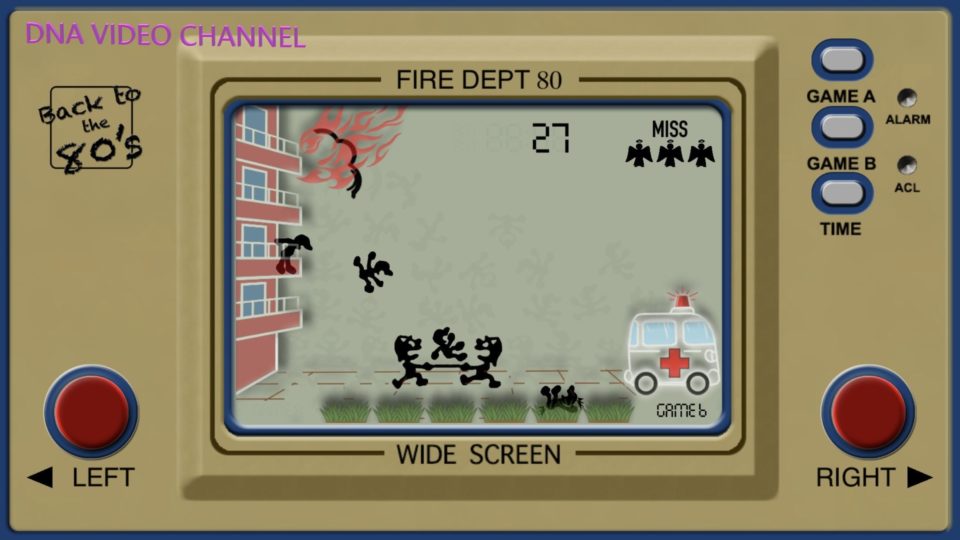 if you want to try the free demo version, download:

Another vintage game is Circus Training, and even in this case it is a novel of the ‘New’ line.

In the Circus just arrived in the city, the seal is trained for the show tonight.

Avoid dropping the balls that the coach throws at you and try to keep them in the air as much as possible!

The better you get, the more balls you will throw and it will be really hard to make a show without errors! 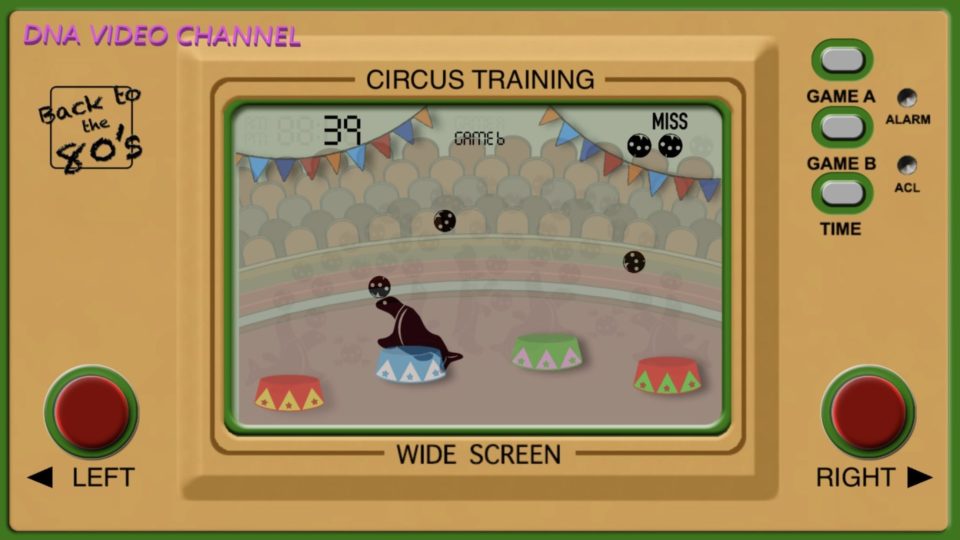 The sixth and last retro game is Piero’s Cement Plant, a great review of a successful 1983 game.

In this version created for the 73rd birthday of Piero, a mason who spent his entire life among the cement bags, a great Classico comes back to life.

The cement mixers are waiting to be filled and you have to help Piero in the cement factory to transfer the cement from the trolleys, to the silos and finally to the trucks!

Move carefully between the various floors using the elevators and open the hatches to empty the silos before they overflow and do some damage to those below!

If you can fill up a truck, you’ll get an additional 5-point bonus!

An adrenaline rush, a game that can only bewitch you.

In this game the developers have invested even more time trying to make the player relive the feeling of the old consoles. 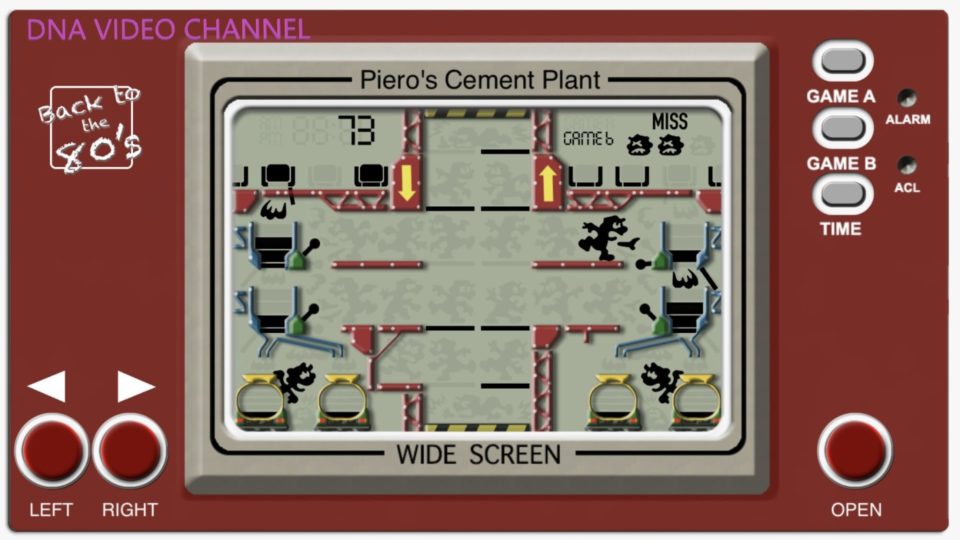 If you find the game interesting, you can download it from iTunes at:

Well, the time has come to draw conclusions on what we have seen of the Retro Games.

Mauro’s project is very interesting and unlike what we see around today, contrary to what one might think, it is a breath of freshness.

But they are dated games, you say.

Well I assure you that if you go looking around the net for such games you won’t find many, especially if you look for them well done.

The problem of innovation lies in realizing something that is not known by the generation that uses the devices for which they are made.

Try asking a boy what a cassette tape is and he will probably not be able to answer it.

Leaving aside the usability of the product in question, it is certainly something that for these guys would be something innovative compared to what is now on the market.

Or present one of the classic films of the old generation, which the boys will almost certainly not know.

Redo the old classic with modern technologies and you will see that success will be assured.

The games are not free, but not too expensive either and above all this choice allows you to avoid having invasive advertising that limits the playability.

The games also have a peculiarity from them that I really appreciate as I often find myself in areas not covered by the mobile network, or the possibility of playing offline.

So if you are young or otherwise, I suggest you try these games, maybe start with the Lite version of Fire Dept 80, so as to have an impression of the potential of the games in question.

As always, give me your opinions about it.

Hello and see you soon

Although with a few days of delay, I wrote this article on the official release of Fire Emblem Heroes. These days I had the opportunity...

Hello and welcome back video channeler, today's article covers a game that fans of the genre waited a long time, or War of the...